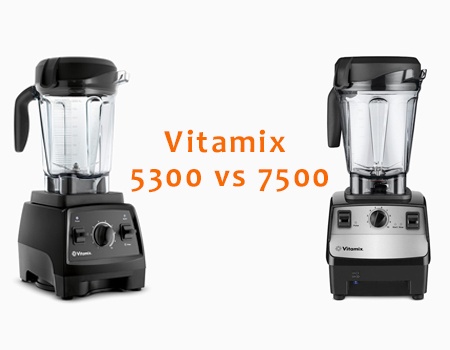 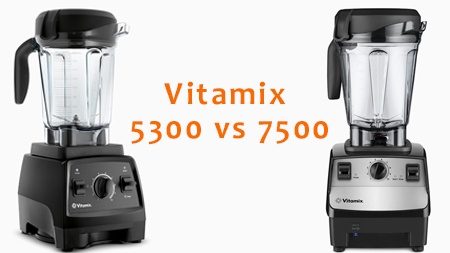 Vitamix 5300 and 7500 both are the next-generation blenders in the Vitamix family. Now, Which one would be the best option to buy? I would say Vitamix 7500 is the best option here.

So, all these features and benefits prove that Vitamix 7500 is better than 5300. Vitamix 7500 will charge you a bit more than 5300, but it is worth paying more because of the motor power, less noise, and updated features. I hope all these points will help you to make the right decision.

If you still need more information, check the following details of each feature of these blenders. Hopefully, you’ll get a clear idea of which blender is better and which one you can choose.

The control layout and design

Both of the blenders have the same control layout on the motor. There is a pulse feature on the blender and rather than a blending action that’s works faster. And as a result, you’ll get a chunkier texture of food.

The blender has been featured with variable speed control, and while the blender is in use, you can control the speed of the blender from 1 to 10. This helps you to get the consistency and texture of the foods you want.

To sell this product, Some people will say both blenders come with a tamper stick and cookbook. Still, the reality is both of them just came with the motor base and container with instructions book; both are premium level blenders. You have to buy a tamper stick and cookbook separately. Still, it’s not gonna charge you too much. It will charge you 20-30$ for the tamper and cookbook. Like others, I can say those will come with that, but when you get this blender, you will be disappointed I don’t want to do that. I respect your needs.

As both the blenders are powerful and they generate a lot of heat, so you may be worrying about if you can leave the blender while in use or not. Well, you do not need to worry as both of the blenders have a cool-running motor. It keeps the blender cool for longer while it is in use. And if the blender is too hot, then the machine will automatically shut off.

It’s too difficult to say that which one performs well because all Vitamix blender gives almost the same result. When it’s about Vitamix 5300 vs 7500, definitely, I will say 7500 performs better; for example, if you put a whole unpeeled apple in both blenders, it will blend the whole apple but 7500 texture will be more smooth for its next-generation motor.

With the Vitamix 5300 and 7500, you’ll have a ‘low-profile’ pitcher, and it makes these blenders to store easily on the kitchen countertop. Both of the pitchers are 17 inches tall. And they are wider enough that you can add a lot of food into the container.

For a versatile purpose, you can use these blenders. If you need to chop any vegetables, then Vitamix will do this for you. Or else, if you need to grind any hard items such as nuts or coffee beans, then you use your Vitamix. Add the items into the container and then run the blender.

This will grind items for you in a few minutes. And if you want to drink any juices or smoothies or soups, or if you want to eat nut butter or make sauces or dips or fruit sorbets anything, then the Vitamix makes it easier for you. It can make foods for you easily, so your stress from cooking will be reduced, right?

The ease of cleaning is one of the important factors to consider when it comes to buying a blender. A self-cleaning pre-settings has in all the Vitamix blenders. So cleaning is effortless, you have to add some water into the container and a few drops of the dish soap, and then for 60 seconds, run the blender. Rinse off thoroughly with water and let it air dry.

There was a big difference when you compared the price of both blenders. You can get a classic Vitamix 5300 at a reasonable price, and it comes with a full 7-year warranty. While Vitamix 7500 is pricey than the 5300 model as it includes the next-generation motor.

When it comes to the warranty, Vitamix is the best of all blenders. You will get a 7-year full warranty with both Vitamix 5300 and Vitamix 7500 blenders. So, about the malfunctioning parts, you do not need to worry.

In this guide, I compared Vitamix 5300 and Vitamix 7500. Both blenders are the same, almost. They both are easy to fit under any kitchen counter, but if you come to the blender design, then the 7500 model is the best. They both have variable speed control features.

However, the Vitamix 5300 and Vitamix 7500, both model blenders, are straightforward to use, and they are very convenient. You can choose any one of them; it’s up to you. But if you want our suggestion, I would recommend you choose the Vitamix 7500 model, and the reason is simple, it has a next-generation motor. And if you cannot afford it, then you can go for the Vitamix 5300. Both are great.

I have more review and comparison suggestions for you about Vitamix 5300 and 7500. Take a look from below if you want to read more.