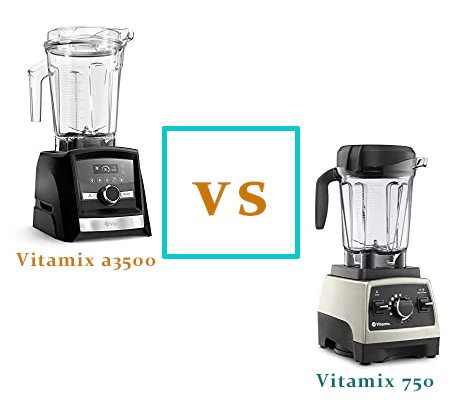 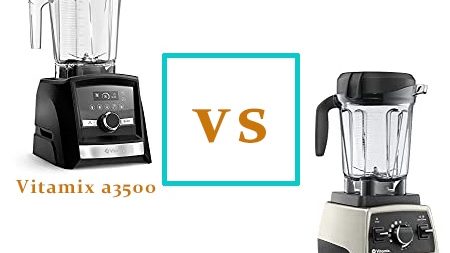 Vitamix a3500 is ascent series smart blender, and Vitamix 750 is a professional series blender. Between these two blenders, Vitamix a3500 would be the best because of its advanced facilities.

These are the main differences that made Vitamix a3500 the best blender. Even, you are getting an upgraded machine with extra features at a low cost.

You are gonna enjoy these similar functions with Vitamix 750 and a3500. But if you want the best performance with improved features then you have to pick Vitamix 13500.

Differences and Similarities – Vitamix pro 750 vs a3500

The ascent series of the Vitamix a3500 provides a touch screen on its blender. And like older Vitamix series blenders, you do not need to press the button. To make a recipe, just touch the screen, and it will make the recipe.

Also, it has a digital timer setting on the blender base. You can set the timer while making a recipe. The timer provides you to get the perfect texture of the recipe.

On the other hand, the Vitamix 750 doesn’t have a touch screen or digital timer function. It provides 10-variable speed settings like other standard Vitamix. There is a pulse button on both of the Vitamix a3500 and 750 blenders. The pulse function helps to make a recipe quickly.

Between these two Vitamix models, the touch screen and the digital timer is the main difference.

Bluetooth enabled, and apps take Vitamix a3500 next level. You can now control the blender right from your smartphone. Also, you can keep track of the nutrition of the food you make. With the android/iOS app, you can unlock the blender easily.

Bluetooth and the smartphone app make the difference between these two blenders, as the Vitamix 750 doesn’t have this feature.

You’ll not buy a blender very often, so a blender’s warranty is a significant thing to consider. A blender should be durable enough so that it can be used for many years to come. You’ll get a 10-year warranty with the Vitamix a3500, and the Vitamix 750 has a 7-year of warranty.

These two blenders can last for more than a decade with proper care and maintenance. If you’re looking for a very durable Vitamix blender, then choose the Vitamix a3500.

If you want to make soup on the Vitamix a3500, add the ingredients to the container and then just touch the soup preset buttons on the touch screen and set it. This will make the soup according to your timer, and once the soup making is done, the machine will automatically turn off.

So when it comes to making soup, the Vitamix a3500 is the best rather than the Vitamix 750.

You have many color options to choose from on the Vitamix a3500 blender. It has black, white, red, copper metal, black stainless steel metal, and brushed stainless metal – 5 color options. Vitamix 750 has only two colors – black and pearl gray.

Keep in mind one thing – depending on the blender color, the price varies.

Vitamix a3500 and Vitamix 750, both blenders, provide a 2.2-peak hp motor, which is 1380 watts and runs at 120V. The motor base provides the blender runs at a high speed without any issue. Also, they both are less noisy during the blender is in use.

With these two Vitamix models, you’ll have some handy accessories in the box. Vitamix a3500 has – a cookbook that contains many recipes you can try, a low-profile classic tamper, a 64-oz container, and a motor base.

This is another thing you need to consider before buying a blender. However, compared to the Vitamix professional series blender, the ascent series blender is less expensive. In the blending power, both of these two blenders work great.

FAQ about Vitamix Professional Series 750 vs a3500

You may have an interest in some other Vitamix comparisons below-

The Best Immersion Blender Reviews – See Who is the Boss! November 10, 2021 » Best Blender

Best Ninja Blender for Smoothies – Get the best Ninja for you! November 10, 2021 » Best Blender, ninja

As an Amazon Associate I earn from qualifying purchases